I find that a lot of people shy away from my camera; however, as I was waiting to cross the street, this traffic assistant continued to stare at it. Initially, being the paranoid woman that I am, I thought I’d done something wrong, that I should not be taking pictures in public.

Then I asked him (words & pointing) if he wanted me to take his picture. He gave a big grin and nodded yes. As I focused the lens on him, he took on this official pose. Cool guy! 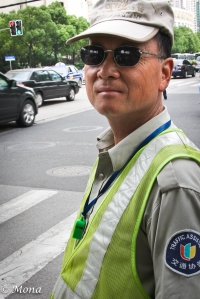 I'd love to hear what you think. Cancel reply